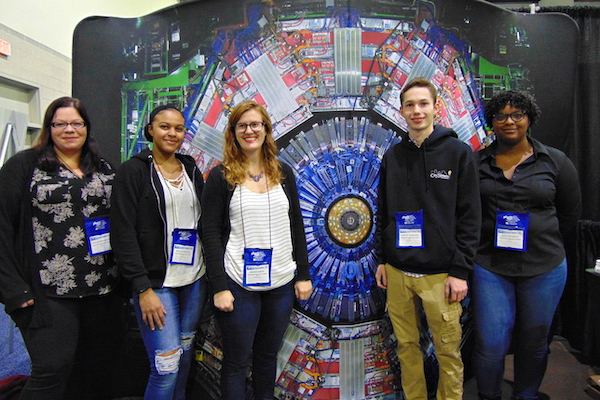 MCLA Assistant Professor of Physics Dr. Kebra Ward (center), who accompanied the students to this year’s PhysCon, said this is the first time MCLA has sent students to the conference, and that the students did all of the heavy lifting, from approaching the Student Government Association and Physics Department for funding to booking the vans.

Around this time last year, Kiah DaViega ’21, a physics major, came upon a pamphlet quite by accident. It was the first time DaViega, president of the MCLA physics club, had heard about the Sigma Pi Sigma Physics Congress (PhysCon), an undergraduate conference held every four years. The pamphlet stated the next PhysCon would be held from November 14-16, 2019 in Providence, R.I. She knew she had to attend.

DaViega and her fellow physics club board members — vice president Amalia Badohu ’21, a physics and chemistry double major; treasurer Reshawna Maine ’20, a double major in physics and English; and physics major and secretary Robert Leonard ’23 — pushed to get the necessary funding so that all four could make the trip.

MCLA Assistant Professor of Physics Dr. Kebra Ward, who accompanied the students to this year’s PhysCon, said this is the first time MCLA has sent students to the conference, and that the students did all of the heavy lifting, from working with MCLA's Student Government Association and Physics Department to collect funding for the trip to booking the vans.

PhysCon is put on by the American Institute of Physics, Sigma Pi Sigma (the national honor society in physics), and the Society of Physics Students (the national undergraduate club). According to Ward, it’s a place for students from across the country to network, attend workshops and plenary talks from luminaries in the field, and take advantage of career and graduate school fairs. This year’s event attracted more than 1,000 students, brought together with mentors, alumni, and renowned scientists. She called it “a chance for a bunch of young physics nerds to nerd out together” and DaViega agreed. “It was so influential to meet students from all over the country who were equally excited” she said.

All PhysCon participants attended a handful of plenary talks on subjects ranging from clean energy to the James Webb space telescope. The talk DaViega enjoyed most was given by the event’s honorary chair, Dame S. Jocelyn Bell Burnell, a living legend in the astronomy field who discovered the first pulsars in 1967.

Each MCLA student signed up for different workshops to get a broader view of the types of physics being taught in colleges and universities around the country. A “day-in-the-life” workshop with current graduate students was helpful for DaViega, who plans on pursing graduate school after MCLA. She enjoyed hearing from students close to her own age who are currently earning master’s degrees. “It makes it more tangible,” she said, “something that you can see yourself doing one day.”

An astronomy outreach workshop was also helpful, DaViega said, as the MCLA Physics Club will hold astronomy nights for local elementary, middle, and high school students in the spring. The goal is to keep kids interested in science and to use the events as an MCLA recruiting tool for high schoolers.

DaViega said PhysCon allowed her to visualize achievable steps to a career in physics. “I’ve been interested in astrophysics since I was a child,” she said. “But physics got harder as I got older. [PhysCon] rekindled my fire and I’m more excited than ever to become a grad student.”

Are you an MCLA student, alum, or faculty member? Do you want MCLA to share your story? Please email Creative and Brand Strategy Manager Francesca Olsen at Francesca.Olsen@mcla.edu.