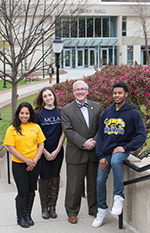 James F. Birge, Ph.D. is the 12th President of Massachusetts College of Liberal Arts (MCLA) in North Adams, Massachusetts and has worked in higher education for more than 30 years. Dr. Birge spent much of his early career in student affairs followed by work with faculty and staff to integrate community-based learning into academic course objectives before serving in executive roles at other institutions.

President Birge has worked in public and private higher education as well as with an association of academic presidents. Although always an administrator, Dr. Birge has taught undergraduate courses in religious studies, writing, and leadership.  Previously, Dr. Birge served as President of Franklin Pierce University in New Hampshire.

Since his arrival at MCLA in 2016 Dr. Birge has also launched a strategic planning process to guide MCLA’s work for the next five years; encouraged the development of new academic majors, minors, and certificate programs; charged the President’s Athletic Advisory Committee to develop new athletic programs; budgeted to create a Chief Diversity Officer position, and; guided the $3 million Centennial Dining Room renovation and the $7 million conversion of the campus pool to a fitness and athletic training center.

As a member of the Boards of Directors for MASS MoCA, LEVER, Inc., 1Berkshire, and the MountainOne Bank Community Advisory Board, Dr. Birge works to build collaborations between the College and the community.

President Birge and Lisa, his wife of 33 years, have three daughters:  Caitlin, Margaret, and Siobhan.