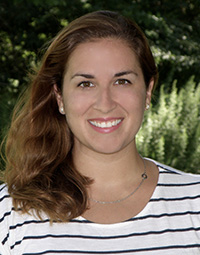 POSC 308: Women in US Politics

I happily joined the History and Political Science department in the Fall of 2016. I grew up in southeastern Massachusetts and am grateful to be back in such a beautiful part of the state.

My interest in politics began at a young age, so studying politics was a natural fit for me. I love teaching students how our political system impacts their lives, but also how they can make a difference. To that extent, I teach a range of courses on American government but my true passion lies in teaching (and researching) Congress, state and local politics, and women in politics.

Aside from teaching, I have completed a couple of internships and am happy to share my experiences with students on the importance of internships, and getting involved in local communities. I worked on a campaign for a local election as the volunteer coordinator, and interned for a Parks and Recreation department in Texas.

My current research focuses broadly on female candidates. I am particularly interested in the impact institutional features and demographic characteristics have on state-level candidate emergence and success. Click here to listen to my NPR Academic Minute on my latest research.

“To Run or Not to Run? U.S. House Campaign Advertising” with Regina Branton and Jared Perkins. Journal of Political Marketing. (201): 1-20.

“The Impact of Gender and Quality Opposition on the Relative Assessment of Candidate Competency” with Regina Branton, Ashley English, and Tiffany Barnes. Electoral Studies. (2018). 54: 35-43.

“Term Limits Encourage More Women to Run for Office in US State Legislatures. 2018. The London School of Economics US Centre daily blog on

“Why We Should Expect Gains for Democratic Women in the House on November 6th”. 2018. The London School of Economics US Centre daily blog on American Politics and Policy. Access here

“Women-Friendly Districts in the States: A Look at the Gap Between Female Democrats and Republicans”. Midwest Political Science Association: Chicago, Illinois. April 5-9, 2017.

Monday, Wednesday 1-2:30pm
or by appointment